A history of LGBTQ workers’ struggles

Decades of fighting discrimination on the job

On February 16, 1991 when Cheryl Summerville was called into the manager’s office, she had already heard that the Cracker Barrel had formalized a policy to fire lesbians and gay men, and were interrogating workers regarding their sexual orientation. She worked and lived in a small town in Georgia where being fired was even more devastating for her than it might have been for others less isolated in larger cities. Over the next year she was transformed from a worker who had never been on a picket line or protest to a nationally known figure helping to mobilize others to protest bigotry.

There is no federal law and no president including Obama has ever issued an executive order banning discrimination by federal contractors. In effect, federal tax dollars are subsidizing discrimination. On April 25 legislation (referred to by the acronym ENDA) was introduced to ban some forms of discrimination against LGBT workers but even this bill has giant loopholes built into it. Similar legislation was introduced in 1974 and every year since 1994. Despite years of organizing and lobbying appeals, it has always been defeated.

The reason for defeat after defeat even in the midst of vastly increasing support for these basic rights is the power of capital. The capitalists do not want to have their hands tied by meddlesome regulations with outsiders imposing rights—especially legal rights that are enforceable in Court. Some corporations have given into the pressure and have established company policies that are not as legally binding. But others like Exxon and the military contractor KBR (the largest non-union construction company in the United States) refuse to even issue a policy against discrimination based on sexual orientation. They are joined in that by countless others ranging from Berkshire Hathaway to Philip Morris, JM Smucker, Publix Supermarket, SYSCO Corp, Dish Network and Advance Auto Parts among others listed in the latest Human Rights Campaign Fund report released this year.

When so few workers have unions, especially those in offices, food service, personal care, department stores, etc, it can be hard to imagine what that means and why LGBT activists would care about unions or why unions care about LGBT people.

Many people connect unions only with pay checks, mostly in manufacturing, mostly with older white guys and therefore mostly irrelevant to their lives. For decades that was a tragic reality as union leaders saw their responsibility in the most narrow way regarding pay, hours, benefits and seniority “pure and simple”. Of course it was never simple. Every issue contained a question: is this a right for everyone?

A right for Black and Latino workers as well as white, for women, and for LGBT workers? Whenever the question was unspoken, the answer was almost always the wrong one for labor. Who forced these questions to be asked? How did unions become the vehicles that they are, or can be today, for LGBT rights on the job? 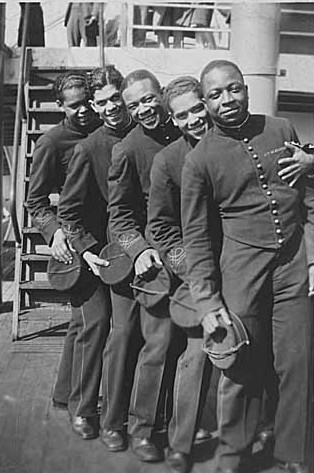 The Marine Cooks and Stewards Union, led by young radical African American workers, had a very large number of gay members and leaders in the 1930s and 1940s.

We are everywhere and we have always been a part of the struggle for justice on the job. In the 1930s and 1940s the Marine Cooks and Stewards Union, led by serious young radical African American leaders, was also a gay union in that its membership had a very large number of gay members. These were activists who played significant roles in their union and larger struggles. Frank McCormick was in his 30s when he participated in the 1934 and 1936 strikes. He was out and obvious and he was not only on the Executive Board of his union but was also a VP of the California CIO for a number of years.

Radicals with a vision of unions as a social force, that is as a movement for rights, came to the fore during this period. It was then that Morris Kight sharpened his skills as an organizer for the CIO Oil Workers union—skills that were later used when he helped found the LA Gay Liberation Front in 1969.

When Kight was organizing oil workers, Kiyoshi Kuromiya was not able to. He was born in an internment camp (concentration camp) for Japanese residents in the United States. But when he got out he joined the fight for civil rights (he was beaten in Alabama in 1963), worked as an assistant to Martin Luther King during the years when Dr. King was building relationships with unions. He then founded the Philadelphia Gay Liberation Front and the following year spoke to thousands at the 1970 Black Panther convention, when the party supported gay rights.

Bayard Rustin was well known for being gay and was a key tactician for the civil rights movement. He was also influential in labor. The respect others had for his work likely played a role in opening the door for the leadership of the NYC teachers union to go along with the formation of a gay caucus in early 1970.

On June 24, 1970 a sit-in demanded that NY Governor Rockefeller institute fair employment practices for lesbians and gay men. Their arrests started a campaign for the “Rockefeller 5”.

During the early 1970s, LGBT activists with a broad vision of a better world and unions as a movement for change, got resolutions for rights passed in the teachers unions, the AFT and NEA. By the mid-1970s contracts were bargained in manufacturing and transport with non-discrimination language for sexual orientation and then later broadened. In the mid-1970s, LGBT union activists got others in the community to join unions in boycotting Coors which demanded that workers take lie detector tests to see if they were gay or pro-union. Unity and respect was built in struggle. In 1978 unions and the LGBT community joined to defeat the Briggs initiative in California which would have banned LGBT teachers.

In the 1980s LGBT caucuses were organized in many unions and networked. AFSCME, SEIU and then the AFL-CIO passed resolutions for LGBT rights at national conventions. Union activists at the local level organized for city ordinances banning anti-LGBT discrimination. In 1987, the AFL-CIO hosted a reception for labor activists going to the national march. Following that there was a determined effort by LGBT activists to organize Pride at Work, the first national LGBT workers organization.

The right to a job, a living wage, benefits—and the power we deserve

The collective actions of LGBT labor activists over decades have changed how many straight union leaders and members think about the role of unions—and the need to fight discrimination. The movement has created both openings for younger activists and the potential to do much more.

Sixty years ago on April 27, 1953 President Eisenhower issued Executive Order 10450, authorizing all federal agencies to investigate and fire workers on the grounds of being gay (“sexual perversion”). This was an intensification of the pogrom beginning under Truman.

Today we are still fighting for the right to a job. Last year there was a struggle at Chick-fil-A in Chicago based on its anti-LGBT stance and ultra conservative owner. Bigots around the country, especially in the south rushed to the store to show that they stood for discrimination. LGBT workers were interviewed, all of them declining to give their name because they could be fired and there would be no recourse.

Today, more than ever, we need a movement filled with LGBT labor activists who understand the lessons of this history. We need activists with broad vision, who can connect war and racism and bigotry of all kinds to the system. We need activists who are dedicated to building a fighting union movement and who see that as connected to a broader movement for justice for all. These are the activists who will be agents of change – real change. That’s the way that we can win the right to a job, a living wage, benefits and the rights and power that every LGBT person and every worker deserves.

Before Stonewall: The LGBTQ movement behind Compton’s Cafeteria riot

Author’s Note: Out of respect for the ways people described their identities at the time, this article uses several terms now considered archaic by the LGBTQ community. Three years before the 1969 Stonewall Uprising that galvanized a generation of LGBTQ activists, and...

“In contradistinction to German fascism, which acts under anti-constitutional slogans, American fascism tries to portray itself as the custodian of the constitution and ‘American democracy.’”- Georgi Dimitrov Introduction Six months ago, on January 6, 2021, a racist...

“Our armies are rising:” Sylvia Rivera and Marsha P. Johnson

Author’s Note: Out of respect for the ways people described their identities at the time, this article uses several terms now considered archaic by the LGBTQ community. In the pantheon of figures in the history of LGBTQ struggles, few stand higher than Marsha P....