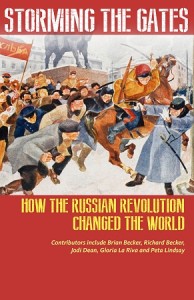 As the first manifestation of socialism, the Russian Revolution and the Soviet Union are critical topics for revolutionaries and communists to study today. This study has to be engaged not solely for intellectual purposes, but for the purposes of learning from and incorporating the lessons of this revolutionary experiment into our world outlook and daily activity. It is in this spirit that we offer the following study and discussion guide for the Party for Socialism and Liberation’s new book, Storming the Gates: How the Russian Revolution Changed the World (available for purchase here).

The questions below are intended to help with both the comprehension as well as to encourage a critical reflection of the text. In other words, they are designed to help with understanding as well as application.

We believe that study should be a collective activity, and that we can learn invaluable lessons from our comrades in the struggle. While this guide can be used on an individual basis, we encourage everyone to study with others, and to seek out not only comrades, but also friends, co-workers, community members, or relatives to join you. If you are near a PSL branch, be sure to check to see if they have a study group for you to join. And if you are interested in  starting a study group, the educational workers at Liberation School would be happy to help! Let us know!

The Importance of the 100th anniversary (Brian Becker)

Why we continue to defend the Soviet Union (Gloria La Riva)

The role of leadership in revolutionary struggle (Nancy Mitchell)

Socialism and the legacy of the Soviet Union (Brian Becker)

Lenin, WWI, and the social roots of opportunism (Brian Becker)

The actuality of revolution (Jodi Dean)

“From the perspective of the future, what led to it was necessary. It could not have been otherwise because everything that happened led to it. Before an event occurs, there are possibilities, options. After something happens, it appears inevitable, destined. Projected time assumes a future inevitability, establishing this inevitability as the fixed point from which to decide upon present actions.” (130)