A review of Kristof and WuDunn’s ‘Half the Sky’ 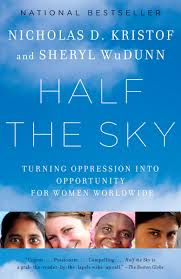 In 2010, Nicholas Kristof and Sheryl WuDunn released “Half the Sky: Turning Oppression into Opportunity for Women Worldwide.” Besides her business writing, WuDunn has also functioned as a corporate executive for the New York Times and “private wealth adviser” for Goldman Sachs. Kristof is a darling of the liberal wing of the ruling class and credited with remaking opinion journalism.

In “Half the Sky,” Kristof and WuDunn have written a manifesto of sorts for the United States to “save” women in the underdeveloped world. WuDunn and Kristof tell the plight of millions of women. They share heart-wrenching anecdotes and factual evidence about women in Pakistan, Afghanistan, Cambodia, Thailand, India and Congo—among other countries—suffering sexual abuse and exploitation.

This is the one broad argument of the book with which we can agree: the exploitation, inequality and oppression of women is a central feature and fundamental problem of humanity on a global scale. Its casualties lie in the millions and its persistence serves as a clarion call for revolutionary transformation.

However, WuDunn and Kristof’s approach to the oppression of women—and the solutions they put forward—are fundamentally flawed. The book reeks of the same individualistic, pro-capitalist feminism that guides the recent book by Facebook executive Sheryl Sandberg’s “Lean In: Women, Work and the Will to Lead.”

In “Half the Sky,” however, the implications are larger because it assumes Western capitalism can resolve the terrible conditions facing women of the underdeveloped world. It is reminiscent of the colonial “White Man’s Burden” politics of the 1800s, just repackaged.

Imperialism is the problem

The United States, Europe, Australia, Canada, New Zealand and Japan are developed countries precisely because they have, for centuries, stole the resources of oppressed nations, monopolized technological developments and structured the global economic system to their benefit. The nations mentioned in “Half the Sky” have been on the other side of that process, bearing all the consequences of colonialism, imperialism and neoliberalism.

Another assumption—implied in the book’s subtitle: “turning oppression into opportunity”—is that women are an “untapped resource.”

Citing numerous reports by Goldman Sachs, WuDunn’s former employer, on how “gender inequality hurts economic growth,” as well as other capitalist banking sources like the World Bank and IMF, the authors draw outrageous conclusions about the economic solutions for women’s oppression.

In Chapter 12, for instance, they write, “The implication is that instead of denouncing sweatshops, we in the West should be encouraging manufacturing in poor countries, particularly in Africa and the Muslim world. … Labor-intensive factories would create large numbers of jobs for women, and they would bring in more capital—and gender equality.”

Everyone knows that such sweatshop conditions are far from liberating; rather the factories super-exploit workers who few other options in order to make extreme profits for a very tiny section of the world’s population.

Equally worthless is the authors’ promotion of microfinance, which consists of very small loans offered with high interest rates to groups of poor people to start small businesses. Again, catering to the predatory interests of the capitalist class is portrayed as a solution to women’s oppression.

These so-called solutions would only feed and support the system that already exploits women.

We need a movement—and a revolution

Women in countries across the world have won major victories. Societies have experienced important social changes that have elevated women’s social positions, reduced inequality and confronted the entire social system of oppression of women. But not a single one of those is the result of increased exploitation or better loans from capitalist banks.

There is a force powerful enough to take on women’s oppression—in all its manifestations—and that is an organized people’s movement.

Here in the United States, a woman’s right to vote was won through struggle. Black and Latina women won important civil rights, along with the entire Black and Latino communities, through the struggles of the 1950s, 60s and 70s. The right to abortion was a victory of a militant and massive women’s rights movement. It was part and parcel of a real rising of the most oppressed sectors of society—at a time when the antiwar movement, the LGBTQ movement and the movements of oppressed communities were well organized, widespread and militant.

Currently, we face a renewed attack on women’s rights across this country, especially in access to abortion and other reproductive care. Those attacks are not isolated to women and in fact are deeply tied to a range of attacks on working and oppressed people. In places like North Carolina, they have been coupled with right-wing attacks on voting rights.

Although there are considerable differences and privileges in living conditions in the United States, the vast majority of women here share common interests to those in Asia, Africa, the Middle East and Latin America.

The “foreign policy” of the U.S. women’s movement must be forged on this basis —solidarity and profound humility, not charity. We have much to learn from the struggles of women across the world.

These guarantees were not won by expanding capitalist manufacturing or microfinance. They were won through struggle, and a particular form of struggle—revolutionary struggle. The liberation of women—in other words, the achievement of full equality, overcoming sexism and violence against women—is ultimately a question of revolution.

This article originally appeared as chapter fifth chapter in Donna Goodman’s Women Fight Back: The Centuries-Long Struggle for Liberation, published through Liberation Media and available for purchase here. Liberation School has a study and discussion guide for the...