May 29, 2008
15,064
Cuba: An Introduction Democracy and Class Society Revolutionary Cuba
Share this article:

Celebration of the 50th anniversary of the launch of the Cuban revolution, the attack on the Moncada Barracks, Santiago de Cuba, July 26, 2003 Photo: Gloria La Riva

In the United States, politicians of all stripes, along with the big-business media, routinely portray Cuba as an oppressive dictatorship. Cuban leader Fidel Castro is said to decide everything in society, supported by a police state where free political expression and participation amongst the Cuban working class is brutally repressed.

Of course, like so many of the stories aired by the mouthpieces of capitalism, it is a lie. But it is a lie with a very clear purpose.

By promoting this lie about Cuba’s socialist system, the U.S. ruling class perpetuates a pretext for the 50-year blockade and aggression against the island country. It also aims to discredit socialism as an ideology—and at the same time cover up the inherent flaws in the U.S. political system. The objective is to demoralize the U.S. working class with the idea that there is no alternative to capitalism, and that the rule of corporations and the few individuals who own them is the normal order of society.

Despite the persistent propaganda against Cuba over the past five decades, the Cuban Revolution remains an example of working-class democracy. This fact lies at the root of U.S. government opposition to Cuba: The Cuban Revolution represents genuine workers’ democracy and the true rule of the majority.

A history of phony elections

Since the U.S. government promotes schemes like the 1992 “Cuban Democracy Act,” it is worth reviewing the kind of “democracy” the imperialists might have in mind for Cuba.

After the U.S. government declared war on Spain and frustrated the Cuban people’s independence struggle in 1898, Washington dominated Cuban politics for the next 60 years.

The U.S. military occupied Cuba from 1898 until 1902. The 1901 Platt Amendment, which rendered the Caribbean island a neo-colony, gave the U.S. government the right to intervene militarily in Cuban affairs at any time.

Before U.S. troops left, Washington left behind a “democratic” political system that would ensure that the masses of Cuba would have no say in their country’s affairs. Voting was restricted to Cubans who met one of three criteria: the ability to read and write, real or personal property worth $250, or honorable service in the Liberation Army. Women were not permitted to vote. These restrictions ended up excluding two-thirds of all men as well. The restrictions on suffrage reduced the number of potential voters to 105,000—only 5 percent of the Cuban population.

When those restrictions were not enough to stifle any independent direction, other measures were employed. Such was the case with Ramón Grau San Martín, who assumed office in 1933 after a revolutionary struggle overthrew the dictatorship of Gerardo Machado. Through the political influence of his interior minister, anti-imperialist fighter Antonio Guiteras, the Grau government passed labor laws limiting the workday to eight hours and required 50 percent of all employees in Cuban industry and commerce to be Cubans. He declared a land reform at a time when 60 percent of Cuba’s sugar industry was U.S.-owned. Women were granted the right to vote.

For the next 25 years, various men served as president, but the real power was Batista—and behind him, U.S. imperialism. Batista’s regime was brutal and corrupt.

When Batista and his band of torturers fled Cuba on Jan. 1, 1959, the old capitalist state was dismantled and a new state was built that empowered Cuba’s workers and peasants. Long before the new government structure—popularly known as “people’s power”—was formalized in 1976, workers’ democracy was exercised on a daily basis.

The social process that unfolded in the decades after the 1959 revolution touched every aspect of life for Cubans of all social classes. For the first time in their history, Cuban workers and peasants had the right to a job, food, health care and education. These rights were not just on paper—they were the real foundation for the new social system. The reign of U.S. capital in Cuba was over; a state to defend the interests of the Cuban working people was born.

On April 16, 1961, in his speech announcing the socialist character of the Cuban Revolution, Fidel Castro said:

This is the setting for Cuba’s democratic system today. Unlike bourgeois democracy as it is practiced in the capitalist countries, Cuban democracy is not designed to maintain the rule of the few over the many. On the contrary, it is designed to allow the Cuban people not only to make decisions in a participative way, but to carry out these decisions and defend their social gains collectively.

Cuban democracy has many aspects that go far beyond elections. Cubans participate in mass organizations that make and carry out policy. They take part in neighborhood planning. Major national decisions and debates are carried out in every workplace and neighborhood.

Elections are but one part of this multi-faceted system. In the October 2007 elections for the National and Municipal Assemblies of People’s Power, 95 percent of all Cubans took part in the voting—compared to the less than 50 percent who take part in U.S. presidential elections. As laid out in the 1976 Constitution, after two years of residence on the island, all persons 16 and older have the right to vote.

Candidates to the Municipal Assembly are nominated in public by neighborhood committees, student unions, farmers’ organizations and trade unions. Over 15,000 candidates are elected to make up 169 Municipal Assemblies of People’s Power.

At the local level, voters can nominate two to eight candidates at public meetings. They are elected if they receive 50 percent of the votes of all the people registered to vote in their district. Delegates are elected directly by the voters.

No candidates receive financial benefit from their positions. The candidates spend no money to promote their campaigns. A simple one-page biography is available for voters to inform them on the backgrounds of the candidates. Voters have access to candidates to discuss any issues they please.

Up to half the members of the National Assembly can be delegates elected at the municipal level. The other half consists of representatives of labor, farmers’, women’s and student organizations. All candidates at the national and provincial level are elected by direct, secret, voluntary vote.

Women make up 43 percent of the National Assembly, ranking Cuba third in the world in female participation in government.

Constant consultation with the people on key decisions in society has been fundamental to Cuba’s democracy, especially in the most difficult and challenging time of its history, known as the “Special Period in Peacetime.” In the four years after the Soviet Union, its main trading partner, suddenly canceled all trade with Cuba in 1989, Cuba’s economic production dropped 34.5 percent. Tremendous shortages in food, fuel and all goods resulted. The Soviet Union dissolved in 1991.

Per capita caloric intake fell from 2,500 calories daily to about 1,500. The U.S. government took advantage of the crisis to pass the “Torricelli Law” and other legislation that severely tightened the blockade.

Even after the 1993 elections, it was decided that a full consultation with the workers and mass organizations was needed as the country struggled to survive the economic crisis of the “Special Period.” It was clear to the revolution’s leadership that, in the face of such tremendous sacrifice on the part of the whole population, the people should have the fullest input on the economic proposals. These harsh measures, which included foreign joint ventures, self-employment and an end to factory subsidies, would mean layoffs. Farmers’ markets with unrestricted pricing would mean price hikes for basic food goods. The objective of these measures was to stimulate production through foreign investments, and to encourage individual incentive because the state could no longer provide full employment.

The newly elected National Assembly suspended its session to bring the proposed economic changes to the people.

In this unprecedented process, called “workers’ parliaments,” more than 80,000 workplace and mass-organization meetings were held between January and March 1994 involving 3,000,000 workers. They discussed at length every aspect of the proposals.

By the end of 2004, the Cuban economy had recovered to the point that the “Special Period” was deemed over. The government implemented a process to carefully roll back the emergency economic reforms. In particular, economic improvement has allowed for a re-prioritization of socialist economic planning. The combination of revolutionary leadership and real democracy guided the Cuban economy through an intense crisis. Now the Cuban people could focus on the socialist principle of economic equality. 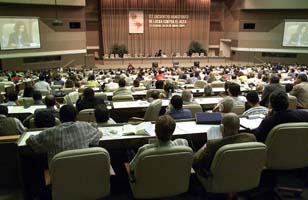 Cuba’s revered leader, Fidel Castro, retired from his government positions in February 2008. Fidel’s brother, Raul Castro, was elected president on Feb. 24 by the National Assembly. Raul, who was also a commander in the July 26 Movement, has tremendous revolutionary credentials with the Cuban people.

Clearly, the Cuban Communist Party is preparing for a significant transition of power to the generation that grew up in post-revolution Cuba. They are doing so despite growing aggression from U.S. imperialism, which is trying to create a situation of chaos in order to overturn Cuban socialism.

In May 2004, before Fidel’s illness, the U.S. State Department laid out a detailed blueprint for what it envisions as a “free Cuba.” The 485-page document, a report from the so-called “Commission for Assistance to a Free Cuba,” also spelled out a number of measures meant to tighten the economic blockade of the island. Many of those measures, like tightened restrictions on travel and remittances and increased radio and television propaganda, have been in place over the last four years.

If the pre-revolution history of U.S. influence in Cuba is any gauge, a restored capitalist “democracy”—enforced by bayonets and tanks—would destroy everything the Cuban people have fought for. It would resemble the “democracy” of today’s Iraq.

The Cuban people are preparing to defend against a U.S.-backed effort to overturn their revolution.

Militant journalism: The role of journalism in class society and revolution

Frank González is the director of Cuba’s Prensa Latina news agency. This article is based on a December 2006 interview with Gloria La Riva. It provides background on Prensa Latina and the theoretical and practical considerations of revolutionary journalism, including...

"Nobody can deny that we made an army and that from the beginning we have inculcated gentlemanly and humane principles to that army. … The armed institutions should offer services in peace, services to the people, services of a technical order. What we will not have...