Voting rights and disenfranchisement in the United States

Millions of people in the United States are denied the right to vote, including immigrants. Photo: Bill Hackwell

The number who will be blocked from voting keeps going up. In April 2008, the Supreme Court upheld Indiana’s voter ID law, which bars registered voters from actually casting their ballot unless they can produce government-issued identification bearing their photograph. Poor, elderly and disabled people—those less likely to have driver licenses—will effectively lose their right to vote. Twenty-five other states have also passed similar voter ID laws.

The Supreme Court decision is part of a centuries-long battle over the expansion and restriction of voting rights. The court’s decision is an effort by the ultra-rich and right wing to erode hard-won gains.

Over years of struggle, widening layers of the U.S. population have won the right to vote. That is despite the fact that the electoral system in the United States is inherently undemocratic. The Democratic and Republican parties—both representing the same class of rich bankers and CEOs—hold a monopoly on political posts. Hundreds of millions of dollars in campaign donations ensure a favorable outcome for the rich.

The capitalist state represents a thoroughly undemocratic dictatorship of the tiny owning class over the vast working class—the class that sells its labor, or more precisely its labor power, each day to survive.

In his 1891 introduction to Karl Marx’s pamphlet “Civil War in France,” Frederick Engels described the capitalist state as “nothing but a machine for the oppression of one class by another, and indeed in the democratic republic no less than in the monarchy.” Elsewhere, in his 1884 anthropological study “The Origin of the Family, Private Property and the State,” Engels described what achieving the right to vote signifies for the class struggle under capitalism: “Universal suffrage is thus the gauge of the maturity of the working class. It cannot and never will be anything more in the present-day state.”

Enfranchisement—the right to vote—remains out of reach for millions of oppressed people in the United States. What a “democracy!”

This backward system excludes people in the interest of maintaining the rule of a tiny rich minority over the masses. It is why electors in the national electoral college—not individual voters—actually decide the outcome of presidential elections.

Prisoners and ex-prisoners in some states and undocumented and resident immigrants all cannot vote—not to mention people under the age of 18. Even when people legally can participate in the electoral system, votes often are not accurately counted.

In order to register to vote, an individual must be “a citizen of the United States for at least one month before the next primary, special, municipal or general election.” So despite laboring in the most difficult and low-paying jobs, over 12 million undocumented workers and more than 17 million permanent legal residents are barred from registering to vote. Despite their enormous and disproportionate contribution to the economy, immigrant workers are increasingly subject to vicious political attacks by the capitalist state and their police.

In seven U.S. states, including Mississippi and Florida, ex-prisoners are permanently barred from voting. In six other states, an ex-prisoner has to be pardoned to regain the right to vote—and pardons are rare.

With racist prosecution and sentencing policies in the United States, African American and Latino people suffer greater rates of incarceration and disenfranchisement as compared to whites. For example, in Florida, 38 percent of ex-felons are African American, even though Black people are only about 13 percent of the state’s population.

In Kentucky, almost one in four African Americans is ineligible to vote because of a prior prison sentence, according to a March 2008 report by the Kentucky League of Women Voters. States with permanent voting bans, concentrated in the South, are often the ones with a legacy of mass incarceration of African Americans following the end of slavery. Prisons have replaced plantations.

More than 5 million people in the United States are classified ineligible because of ex-felon status.

It is neither an accident nor an oversight that the poorest, most vulnerable and exploited would be deliberately denied voting rights. Working-class people tend to favor more progressive political and economic policies.

Another disenfranchised group in the United States is persons under 18 years old. This removes millions of young people who are open to social change. Austria, Brazil, Cuba and other countries allow 16-year-olds to vote. Sixteen- and 17-year-olds work, pay taxes and are frequently treated as adults in criminal cases—but still cannot vote.

A history of disenfranchisement 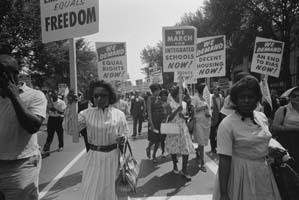 Throughout U.S. history, the right to cast a vote has been denied to workers and oppressed people. Voting is something many people take for granted, but like every democratic right in a bourgeois democracy, it is something that workers have fought—and often died—to achieve.

Prior to 1850, only white male property owners were allowed to vote. New Jersey was the first state to take away the land-owning requirement for white men to vote in 1807. By 1850, this spread to all states, granting all white men—and white men only—the franchise. The number of those who could vote began to expand, but was still severely limited in terms of the total population.

After the end of the Civil War, African Americans were nevertheless denied the right to vote in 19 out of 24 “free” Northern states. By 1870, Black men had achieved the right, at least on paper, throughout the country. The Constitution’s 15th Amendment stated: “The right of citizens of the United States to vote shall not be denied or abridged by the United States or by any State on account of race, color, or previous condition of servitude.”

The 15th Amendment is one of the Reconstruction amendments passed in the years after the Civil War. These amendments were meant to push forward the restructuring of U.S. society to bring equality to former slaves and to help solidify the defeat of the Southern slavocracy. The Union army occupied the South and ensured gains for Blacks until 1877.

That year, Republican president-elect Rutherford B. Hayes—having lost the popular vote in the 1876 elections and with the election outcome uncertain in the electoral college—agreed to what became known as the Compromise of 1876, or in the Black community as the “Great Betrayal of 1876.”

Hayes and the Republicans agreed to remove all remaining federal troops from the South in exchange for the Republicans retaining the White House. This signaled the defeat of Reconstruction and began the de facto reversal of equality gains for Black people.

Southern states quickly implemented the use of poll taxes, literacy tests, constitutional interpretation tests and citizenship knowledge tests to deny the right to vote to Black people. A reign of Ku Klux Klan terror and lynching enveloped the South as the Northern troops were removed.

Until the 1960s, Black men and women still struggled to vote, especially in the Jim Crow South. The civil rights movement forced Congress to pass the Civil Rights Act of 1964, followed by the Voting Rights Act of 1965. These laws were important democratic victories won by the blood and struggle of millions of African Americans and their anti-racist allies. These acts improved the immediate situation of racist terror facing Blacks in the South and struck a deadly blow to the Jim Crow apartheid system of laws.

Many of the laws and restrictions that prevented Black people from voting also kept poor whites away from the polls. Women also were denied the right to vote until 1920, when the 19th Amendment was ratified. Women had fought hard for suffrage since the country was founded, but were consistently denied this right based upon their gender.

The illusion of democracy

Modern-day disenfranchisement is less overt than during the days of Jim Crow, but it still takes place. The laws barring prisoners and ex-felons, for example, hit oppressed communities disproportionally hard.

Finding any reason to throw people off of voter rolls, or simply refusing to count votes, is common. In the 2000 and 2004 presidential elections, hundreds of thousands of voters, mainly African American, were disenfranchised.

In 2000, the Democratic candidate Al Gore won the overall popular vote against Republican George W. Bush by over half a million votes. But the ultimate decision was in the hands of the electors of each state, not the popular vote. The vote was so close that the outcome was decided by electors in Florida.

Tens of thousands of Floridians’ votes were not counted at all. Votes were disqualified due to voting machine errors, especially in districts that were primarily African American. Votes allegedly were being recounted, and the Democratic Party appealed to the Florida State Supreme Court for this to continue. At the same time, the Republicans brought the case to the U.S. Supreme Court, which ruled that the vote recount should stop. The highest arbiter of the ruling class decided that the dispute over the presidency should end and be resolved in Bush’s favor.

The Democratic Party leadership surrendered the presidency without a further fight.

In 2004, hundreds of thousands of votes in Ohio were not counted. The majority of exit polls taken on Election Day favored Democratic presidential candidate John Kerry over President Bush. Ohio was a pivotal race in deciding the presidency.

It is obvious that the electoral system in the United States is inherently flawed, but gives the illusion that everyone eligible to vote will be allowed to vote and their votes will be counted. Capitalism needs to maintain this illusion.

The right to vote is an important democratic right that the working class has had to fight to win under capitalism. Winning this right, however, does not change the nature of capitalism, nor does it make the capitalist state more oriented toward working-class interests. Voting will not achieve the fundamental systemic changes needed to eradicate exploitation, racism and bigotry.

But continuing the struggle for universal suffrage—for prisoners, ex-prisoners, all immigrants and anyone disenfranchised by this rotten system—is an important step toward building working-class unity.

November 4, 2008, is Election Day in the United States. Tens of millions of people will cast their vote for the next president of the United States. The 2008 elections have several interesting features. It will most likely be remembered as the one where the leadership...

Ideology and economics in class society: Base and superstructure

One of the many profound contributions that Karl Marx and Frederick Engels made to the cause of socialist revolution was their analysis of the relationship between the economy and other aspects of society, like politics and culture. Beginning with Marx’s 1845 “Theses...