Black communist leader Claudia Jones was commemorated on a Royal Mail stamp in 2008. 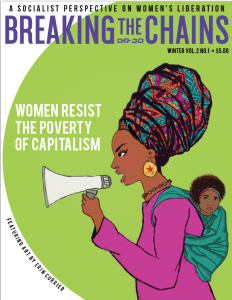 This article was published in Breaking the Chains, a socialist women’s magazine. Get the whole issue here.

Claudia Jones was a revolutionary communist and anti-colonial activist. Born Claudia Vera Cumberbatch on Feb. 21, 1915, in Port-of-Spain, Trinidad, Jones spent her life fighting for the liberation of the workers of the world. She was outspoken on issues of race and gender and utilized her position in the Communist Party USA to advance the causes of oppressed people. Throughout her lifetime, she championed many causes, which included education, housing and health care.

Economic hardship forced Jones and her family to emigrate to the United States in the early 1920s. In 1936 she joined the campaign to free the Scottsboro Boys — nine Black teenagers falsely accused of raping two white girls. At the time, the Communist Party was leading the movement to free the Scottsboro Boys, and Jones joined the Youth Communist League. She found in the organization comrades who would fight for the causes that were important to her. Chief among such causes were the liberation of Black people and of women. In fact, Jones credited her experiences as a Black working-class woman in Jim Crow America for her understanding that scientific Marxist-Leninist philosophy is the antithesis of racist ideas.

Claudia Jones advocated for greater diversity in progressive and revolutionary organizations. In one of her most well-known essays, An End to the Neglect of the Problems of the Negro Woman, Jones argued that in order to effectively mobilize the Black community the Communist Party needed to address the issues facing Black women. In the article, Jones gave historical context to Black women’s roles as leaders and organizers in their communities. She admonished progressives for failing to include Black women both organizationally and socially. She wrote that “winning the Negro women for the struggle for peace is decisive for all other struggles.” According to Jones, Black women’s position in the working class makes them the most capable of understanding the evils of the racist, capitalist system and, therefore, the need for socialism.

Claudia Jones prioritized the need to end racism and chauvinism in all its forms. She noted that the “battle of the sexes” narrative that was often presented in the media and academia only ever served to divide and further oppress working-class people. Myths of women’s inferiority are a tool that was, and continues to be, used to keep working-class people from recognizing their mutual interests in breaking away from the capitalist system.

As a member of the Communist Party of the United States, Jones was able to develop her skills as an organizer and a journalist. She wrote for the CPUSA’s newspaper, the Daily Worker, and was the editor of the Youth Communist Leagues’ Weekly Review. After becoming a full member in 1945, Jones became a prominent leader in the party. She continued to work on various publications and was even elected to the National Committee of the party in 1948.

The U.S. government persecuted Claudia Jones, as they did many members of the Communist Party. In 1948 she was arrested under the Smith Act for teaching Marxism. In total, she was arrested three times. In 1955 she was deported and sent to live in England. Upon her arrival, she sought out members of the Communist Party. She found that, much like its American counterpart, the party struggled with combating racism. She aligned herself with the Communist Party of Great Britain, which was the only party there addressing imperialism and racial inequalities at the time.

In England, Jones worked with Afro-Caribbean communities, and much of her work addressed fair housing and education. She also played a major role in organizing the Notting Hill Carnival. She stressed the importance of the artists in the community, stating that “a people’s art is the genesis of their freedom.” Jones exposed the connection between the communities with which she worked and imperialism. She utilized the skills she had developed as a journalist in the CPUSA to run a Caribbean newspaper called The West Indian Gazette in which she updated readers on anti-imperialist struggles around the world.

Jones continued to fight for the liberation of women, Africans and members of the African diaspora. The eradication of colonialism and imperialism throughout the world remained central to her organizing. Claudia Jones worked tirelessly to advance the causes of socialism and liberation from the time she was 18 years old until her death in 1964.