Is the United States one nation?

MOST people outside Chicago had never heard of Barack Obama before July 2004. Since his keynote address at the Democratic National Convention, this young, Black politician from Illinois has been widely touted in the bourgeois media as a “rising star” in the Democratic Party. He has quickly gained national prominence. What makes Obama so popular?

Obama’s speech urged Black voters to put aside their doubts in the Democratic Party leadership and support John Kerry’s presidential bid: “There’s not a Black America and white America and Latino America and Asian America; there’s the United States of America. … We are one people, all of us pledging allegiance to the stars and stripes, all of us defending the United States of America. In the end, that’s what this election is about.”

The false idea of “One America,” regardless of how widely it is projected by bourgeois politicians or how joyously embraced in the media, does not take into account the divisions created and maintained by the U.S. capitalist system. Capitalism enforces stark inequality both between rich and poor and between oppressor and oppressed nationalities.

The most clear-cut example of this division is the political and economic disparity between white and Black people in America. Black people are part of the multinational and multiracial working class in the U.S. Because of the unique oppression shared by Black people in North America for the past 400 years, African Americans in the U.S. also have the characteristic features of a distinct nation.

From the point of view of Marxism there are not two societies in the United States. There is one society dominated by the capitalist class. Within this bourgeois society, all the economic, political, social and cultural institutions are under the control of an overwhelmingly white racist ruling class. U.S. society is permeated with racism emanating from and promoted by the ruling class—previously the apartheid-like Jim Crow segregation—to make super-profits from the exploitation of Black labor.

The mass of the white population, including substantial sectors of the white working class, has historically been infected with racism and chauvinism. Thus, national oppression also functions as an effective tool to keep the multinational working class divided.

While there is one bourgeois society in the United States, there is more than one nation within that society. There is the dominant oppressor nation led by the white bourgeoisie, and there is the distinct African American nation and other oppressed nations.

From the point of view of Marxist strategy and tactics, it is the obligation of all class-conscious white workers to make the fight against racism a central part of the class struggle. It is also the obligation of progressive and revolutionary forces from within the oppressor nation not only to militantly combat all forms of racism and chauvinism but to support the right of self-determination for those fighting within the oppressed nation for liberation.

Despite the defeat of formal segregation, evidence of the “separate and unequal” status of African Americans in the U.S. persists in every area of life.

In the U.S., three times more Blacks than whites live in poverty. Approximately 20.2 percent of Blacks have no health insurance, compared to 14.2 percent of whites.

The official unemployment rate for African Americans is more that twice that of whites—10.8 percent versus 5.2 percent. Fewer than 50 percent of Black families own homes, while more than 70 percent white families own. Blacks are denied mortgage and home improvement loans twice as frequently as whites.

In schools, Black students are half as likely as whites to be placed in Honors or advanced placement classes, and 2.4 times more likely to be placed in remedial classes. Public schools in predominately Black neighborhoods receive less funding than those in white neighborhoods.

This is an example of one of the historical ironies built into the U.S. and all capitalist societies. Hundreds of African American laborers were used to construct the building housing the Senate, yet not one African American currently participates in the Senate meetings inside. 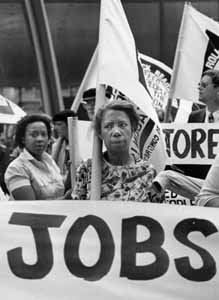 The African American people were forged into a separate nation by their particular history, their shared experience in the United States. The material basis for the creation of the Black nation can be traced to the earliest forms of capitalism in the U.S., which grew rapidly through the plantation system in the antebellum South.

This system relied upon slave labor to produce agricultural profits from the land acquired by the early white capitalists through the slaughter of Native Americans. Millions of Africans from different regions of Africa were kidnapped and brought to the U.S. These Africans spoke different languages, practiced different religions, had different cultures, engaged in separate economic activities and came from distinct tribes and nations. White slave traders abruptly divorced them from their respective lands, languages, cultures and societies and sold them into slavery. In the U.S., slaves were forced into a new single nation, the Black nation.

The slavery system provided much of the initial material wealth for the U.S. ruling class. It also dominated the political, legal and economic norms of the U.S. for the first 100 years of its existence. Slavery was the earliest form of the institutionalized oppression of the African American people in the U.S. Although plantation slavery no longer exists, the institutionalized oppression of African Americans continues today.

Black national consciousness developed over time within this context of oppression and from the desire to be free.

The movement started by Marcus Garvey in the early 1900s is an example. Garvey’s movement marked the entrance of Black national consciousness on the U.S. political scene. It articulated the desire of Black people to separate from the U.S. and establish their own nation in Africa, free of white domination. It was also one of the largest movements of African Americans in history. Garvey’s ideals of Black national pride, expressed through symbols like the red, black and green flag made a lasting impression on the consciousness of the African American community.

In the 1950s the Nation of Islam, a religious and nationalist movement, developed a large following, especially in the prisons and in other super-oppressed sectors in the African American community. Their appeal was based on the frustrated desire among the most oppressed to build a separate Black society.

The Black Panther Party for Self-Defense arose during the revolutionary up surge in the U.S. at the height of the Vietnam War. The Black Panthers were a youth movement that recognized that the Black community faced national and class-based oppression. They initiated inner-city breakfast programs and set up free health clinics while fighting racism and oppression in cities across the U.S.

UNITY ON A CLASS BASIS

Barack Obama’s speech mischaracterizes the problem of racial divisions in the United States. It also encourages a false solution. His plea for “unity” behind the Democratic Party’s presidential bid mimics the hollow calls for unity made by capitalist politicians, both Black and white, for many years before him.

It keeps the workers divided, fighting each other and competing for lower wages. Workers are prevented from realizing their potential as a united revolutionary force. The subjugation of nations for exploitation is one of the most devastating features inherent to capitalism.

Recognizing the class character of national oppression is fundamental to overcoming it. Achieving unity among the masses of Black and white people in the U.S. is perhaps the most important task for socialists and progressives here. This is not the same kind of unity that bourgeois politicians are urging.

The unity of millionaire politicians and the oppressed communities that they cynically manipulate for political support is not unity at all. Exploiter and exploited can never be equal.

Unity can only be achieved on a class basis. Workers of all nations must acknowledge and struggle against the oppression and inequality that exists, and unite in the struggle to end it.

At the height of the struggle for Black liberation in the U.S. in the 1960s and 1970s, neither the capitalist system nor its elected officials handed African American people basic democratic rights. Relentless struggle by African Americans, combined with the struggle and support of the most progressive forces of all nationalities, overturned the capitalist Jim Crow establishment and won the political rights they have today.

It is only in continuing the struggle across national lines, for the self-determination of all oppressed people, that real progress and unity can be won in the future.

A weapon against radicalism: Debunking the myth of the conservative Black voter

Nina Turner’s loss, the primary results of Bernie Sanders, India Walton’s win—and then loss—the victory of Eric Adams, and the triumph of Cori Bush’s sit-in once again ignited the political discussion around the political make-up of the Black electorate. The general...