Shattering the idea of ‘women’s work’

A student in the Cuba's educational system, which promotes women's equality in all fields, including science. Photo: Bill Hackwell

Women and the workplace in socialist societies

Although politicians might occasionally make hollow statements and enact toothless policies about gender non-discrimination, the historical record of women’s participation in professions under capitalism is dismal. Women have been, despite individual exceptions, systematically excluded from the positions in society that are most influential, well-paying and highly regarded.

In the United States, one of the most highly developed countries in the world, women have made important breakthroughs in the workplace, but the system of male dominance —and gender division of labor—remains firmly embedded in the capitalist economy.

The most deeply exploited layers of the working class are disproportionately made up of women. Over 75 percent of workers in the ten lowest-paying occupations—childcare workers, housekeepers, home health and personal care aides, cashiers, waiters, food servers, food prep workers, bartenders, and hand packagers – are women. For women of color, as well as lesbian, bisexual and transgender women, experiencing additional forms of discrimination, the inequality is even worse.

In other areas of the economy, women are dramatically underrepresented. Although 47 percent of people in the U.S. workforce are women, according to a 2011 Bureau of Labor Statistics report less than 34 percent of physicians and surgeons, 32 percent of lawyers and 14 percent of architects are women.

In science, technology, engineering and mathematics (STEM) jobs, women’s participation is actually declining. Women held 34 percent of these jobs in 1990, already a very low figure, but as of 2011 this proportion was down to 27 percent.

There is no biological difference that explains these statistics. It is the result of patriarchal culture and the form of economic organization. 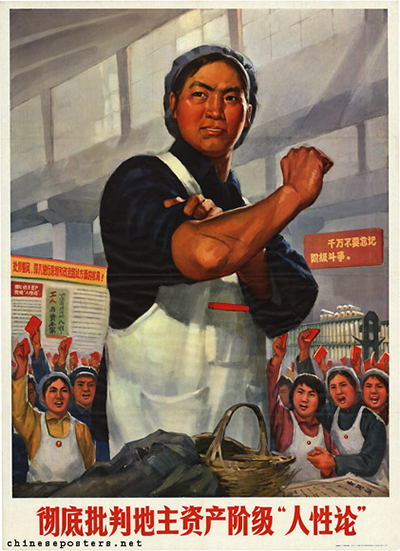 A poster in China’s Cultural Revolution shows women challenging a manager with the words: “Thoroughly criticize the ‘theory of human nature’ of the capitalist class.”

The first socialist revolutions took place in societies that suffered the worst regimes of patriarchy and feudalism. The uplifting and liberation of women became a central task.

In these first countries trying to build socialism, the economic basis did not yet exist for the complete elimination of the gender division of labor, and vestiges of patriarchy clearly remained. But the rate of progress made as a result of revolution and socialist construction was staggering nonetheless.

The Soviet Union legally codified full gender equality before some capitalist states recognized women’s right to even vote. Just 2 percent of engineers were women when the process of socialist construction began. By 1967, this figure had risen to 41 percent. In 1956, 53 percent of skilled Soviet workers were women.

In Cuba, women hold 45 percent of parliamentary seats. Between 1970 and 1990 the female labor force grew by 22 percent. As of 2010, Cuban women make up 46.7 percent of civil state employees, 67 percent of university graduates, 65.7 percent of technicians and professionals, 70 percent of health and education workers, 51 percent of researchers, 56 percent of judges and 43 percent of members of the National Assembly—the main legislative body of the country.

In 1974, the socialist government of Cuba initiated a national discussion and debate, which reached into every neighborhood, on a new Family Code. The Code, which became law on International Women’s Day 1975, challenged all of society to rethink and reorganize relations and labor in the home, to share in household chores, and advance towards women’s liberation and real equality.

Unequivocal guarantees of women’s equality can be found in the constitutions and fundamental laws of every socialist state in history. The Chinese constitution of 1954 declared, for instance that, “Women in the People’s Republic of China enjoy equal rights with men in all spheres of political, economic, cultural, social and family life.” A constitutional provision of this type was a central demand of the mass U.S. women’s movement of the 1970s, but the capitalist politicians refused and still refuse to budge on any sort of “Equal Rights Amendment.”

These laws did not just exist on paper. They were guides to the on-the-ground practice of women’s liberation. They created a legal framework for women themselves, their mass organizations, along with many progressive and revolutionary men to challenge, with the backing of the government, patriarchal aspects of society.

A common ruling-class line is that socialism may sound good in theory, but fails in practice. However, the record is clear. Capitalism is a consistent, miserable failure when it comes to women’s equality in the workforce, and it has only been socialist societies that have proven capable of constructing an economy on the basis of gender equality.

What a socialist government could accomplish in the United States

A socialist government in the United States would build on the remarkable successes of previous socialist revolutions, ensuring full gender equality under the law, requiring equal pay for comparable work, launching mass campaigns against sexism and instituting widespread affirmative action policies to undo the legacies of capitalist bigotry in the workplace.

Under socialism in the United States, jobs would be created on the basis of the needs of society and distributed according to individual merit, not the prejudices of the employer class.

Even those working the least desirable jobs would receive living wages, education, health care and housing as guaranteed legal rights. A new culture of work would be built in accordance with this economic foundation, stressing the dignity of everyone’s labor and contributions to society rather than glorifying money.

But the high-tech and industrialized economy of today could go even further in breaking the social basis of women’s oppression.

Defenders of the sexist status quo often cite the division of labor between men and women in early human societies as if it were “human nature.” But the present-day development of technology and machinery has essentially eliminated any biological basis for dividing types of labor according to gender.

The socialization of what under capitalism is unpaid “household labor”—cooking, cleaning, child-rearing, etc.—would further lays the foundation for eliminating reactionary conceptions of “women’s work” and the gender division of labor entirely.

Moreover, because the socialist government guarantees economic security to all, this would break the economic dependence that have been so central to the family unit under capitalism, and often makes abusive family situations so difficult to escape.

Although women’s liberation cannot be achieved overnight, requiring continuous struggle against all the “old crap” from capitalist and feudal society, a socialist reorganization of society lays the basis for women’s liberation.