The AIDS fight back: reflection from a revolutionary 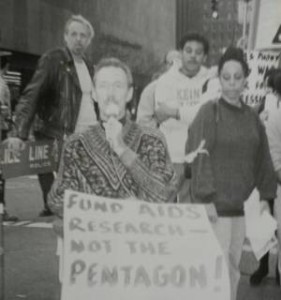 I remember in the 1980s having to sneak into the hospital to be with my partner, lover, best friend, when he lay dying. Obviously, the hospital administration didn’t consider our life-partner commitment was in any way valid. He was suffering with severe pain, clogged airways, and covered with KS lesions (Karposi Sarcoma). He was confused and alone — except for me, plus comrades and friends who were always there.

Once a robust and healthy person, he worked at the phone company, but now was dying a slow and painful death. Earlier, during his illness, the bosses at the phone company told him not to report to work. He defied them and showed up. When they set up a desk in a closet, he called the union and the union rep stepped in to help him.

The employees at the hospital were terrified and rarely entered his room. When they did, they were dressed in Darth Vader-style gear — a terrifying sight for a dying person

It was a new terrifying disease and nobody knew where it came from. At first they called in GRID — Gay-Related Immuno-suppressive Disease. Meanwhile, people on the street were talking about a new “gay cancer.” People were dying all the time and everywhere from the disease.

On June 5, 1981, the Centers for Disease Control (CDC) reported five cases of Pneumocystis Carinii Pneumonia in young men. Within just a few years the epidemic would explode, mainly among gay men, IV drug users, plus hemophiliacs from HIV-tainted blood transfusions.

Instead of recognizing and addressing an emerging global pandemic (over 30 million have died, and over 35 million are currently infected), the U.S ruling establishment pretended it wasn’t happening.

Most liberals, with a few exceptions, cowered and ducked their heads. Right-wing demagogues and bigots of all stripes were seizing the moment to attack and push back the burgeoning LGBTQ movement that had been growing since Stonewall in 1969. In addition to gay men, they also tried to blame immigrants for the crisis, saying “foreigners” were threatening the country.

As the fear spread like wildfire throughout the population, the government went along with the extreme homophobia and racism that filled the airways and newspapers. Gay men were described as sexual deviants practicing unnatural and therefore sinful debauchery and leading lives of carnal decadence. Immigrants were scapegoated, as always happens during a capitalist crisis. It is difficult to overestimate the intensity of the bigotry, fear-mongering and violence that dominated that period. Meanwhile, the silence from government was deafening.

Bigots went wild with their denunciations of gay men: Jerry Falwell, the spokesperson for the religious right, announced that, “AIDS is the wrath of God upon homosexuals.” President Reagan’s communications director Pat Buchanan declared that AIDS was “nature’s revenge on gay men.”

Even after it was clearly established that HIV, the virus that causes AIDS was transmitted only by unprotected sexual activity or exposure to infected blood products, and not by touching or coughing, the fear continued.

A school in Queens, New York, had to close because it was claimed that a second-grader at the school was HIV-positive. Fear-mongering politicians made a big deal of this, and 944 students out of 1100 stayed out of school.

In 1986, the house of a family in Florida was burned down after courts had ruled that their three sons, who were HIV-positive pursuant to blood transfusions of tainted blood, had to be allowed to attend school. The judge used the clear evidence that AIDS could not be spread in casual school or work-based environments.

A six-year old mentally disabled girl was ordered by a federal judge to attend a Florida school encased in a 6-by-8 foot glass booth to avoid any chance of spreading the disease.

Ryan White, the 14 year-old icon in AIDS fightback history, launched a successful fight to attend a public school in Kokomo, Indiana. After winning in court, White was taunted at school by other children who wrote obscenities on his locker and shouted insults as he passed in the hallway. Vandals broke windows of the family’s house and slashed the tires of their car.

Looking back, it is difficult to overestimate the intensity of the bigotry, fear-mongering and violence that dominated that period. Meanwhile, the silence from government was deafening. President Ronald Reagan and conservatives in Congress fought against bills that would fund public education to counter AIDS hysteria and promote condom use and other means of AIDS prevention.

It was not until November 1987 that Reagan even uttered the word “AIDS.”

In the tradition of Stonewall and years of struggle, gay men and other supporters of LGBTQ liberation did not stand by silently as the crisis unfolded.

Militant demonstrations sprang up in San Francisco, New York, Los Angeles and cities across the country. Hundreds of thousands entered the arena of struggle to fight the multi-faceted crisis known as AIDS.

Prominent individuals disclosed their HIV-positive status, sending a shock-wave throughout the country and the world. Rock Hudson, the handsome movie star, appeared in public as a gaunt and emaciated figure, and announced to the world that he had been sick for some time with AIDS. He died shortly after.

These events shook millions of people into a sobering reality check and inspired many more to speak out in defense of those targeted by the AIDS crisis.

To break through the stigma associated with the disease, Nelson Mandela wore a t-shirt that read, “HIV positive” after it was revealed that his son had died of AIDS.

In 1988 over 110 demonstrators were arrested in Wall Street in front of the New York Stock Exchange and a year later AIDS activists infiltrated the Stock Exchange and chained themselves to the VIP balcony demanding free drugs for people with AIDS. Many current members of the PSL participated in these actions and supported the growing militant fight-back movement.

In one of the largest demonstration since the Vietnam war, tens of thousands demonstrated and shut down the Food and Drug Administration in Washington DC, demanding immediate action to manage the epidemic.

The Women’s Caucus of ACT-UP occupied the Center for Disease Control to demand that women with AIDS receive the same equal treatment as men. Instead of diagnosing women with AIDS, their disease was referred to as AIDS Related Complex (ARC) thus excluding women from the benefits and care allocated by this time to men with AIDS.

Denial of Education and Prevention Programs

The government failed and refused to fund programs for prevention and education about the epidemic. In New York City, Cardinal O’Connor mounted a public campaign, in line with Pope John Paul II and the Catholic hierarchy, against condom distributions and safer-sex education. In response, activists disrupted mass at St. Patrick’s Cathedral where 111 protesters were arrested.

In 1991, during Operation Desert Storm, protesters entered the studio of the CBS Evening News, chanting, “AIDS is what’s news! Fight AIDS, not Arab People!”The next day activists hung banners in Grand Central Station: “Money for AIDS, Not for War” and “One AIDS death every 8 Minutes!”

Millions have been lost in the United States, in Africa, in Haiti and the Caribbean, and throughout the world. Today millions more still suffer and are denied treatment worldwide, amounting to a massive crime against humanity for the sake of corporate profits and imperialist domination.

Instead of developing a centralized plan based on science and public health, the capitalists have stood by while chaos rules, or sought to profit from it. A sane, socialist, planned response to a crisis such as AIDS, could have contained the worldwide tragedy that has unnecessarily taken so many lives.

The same militancy that animated the AIDS movement must be carried forward in the fight for universal health care and socialism. Stand up, fight back!

Before Stonewall: The LGBTQ movement behind Compton’s Cafeteria riot

Author’s Note: Out of respect for the ways people described their identities at the time, this article uses several terms now considered archaic by the LGBTQ community. Three years before the 1969 Stonewall Uprising that galvanized a generation of LGBTQ activists, and...

“Our armies are rising:” Sylvia Rivera and Marsha P. Johnson

Author’s Note: Out of respect for the ways people described their identities at the time, this article uses several terms now considered archaic by the LGBTQ community. In the pantheon of figures in the history of LGBTQ struggles, few stand higher than Marsha P....

Resolution of the Party for Socialism and Liberation: Marriage equality and what it means for the LGBTQ struggle

July/August 2015 Preamble The following document was written by Sarah Sloan, Radhika Singh and Nathalie Hrizi, and initially circulated on July 4, 2015, as an internal document for discussion amongst members of the PSL. Throughout the course of two weeks of internal...