The last few years has seen the resurgence of anti-racist struggle on a national scale. We had the Jena 6, Troy Davis and Trayvon Martin cases all promoting national activity and marches. Each of these dealt with the criminal justice system in the Deep South, and the national reaction in Black communities reflected the enduring psychological connection to the struggle against slavery and Jim Crow historically concentrated in that region.

Currently, the Dream Defenders, a group of mostly Black youth from Florida, are occupying the State Capitol, demanding an end to “Stand Your Ground” laws and mass incarceration policies. Their aroundthe-clock sit-in is inspiring people around the country, and signals the emergence of heightened tactics in the battle against the racist criminal justice system.

In addition, local cases of police brutality like Sean Bell and Oscar Grant, not to mention others, have birthed protest movements, the creation of new organizations, and broken into the cultural and artistic scene. This has been accompanied by mass interest in the phenomenon of mass incarceration (The New Jim Crow), although the struggle over the prison system has taken place primarily within the prison walls, with multiple hunger strikes.

These protest movements have had a genuine mass character. Working-class Black and Latino youth have been at the forefront, but young people of all backgrounds have participated in large numbers and been moved by these struggles. This means that hundreds of thousands now have an experience of marching, chanting and fighting for justice only to be denied it by the system. A great many others have supported these struggles from the sidelines, on social media or symbolically participated (wearing hoodies, for example).

Undoubtedly, some who marched for the Jena 6 were then drawn to march for Troy Davis and participate in other causes. But each new incident has also brought thousands more people into struggle.

For some, the endurance of injustice manifests in cynicism (“protesting doesn’t matter”), but for others it is empowering and potentially transformative to experience the spontaneous energy and power of the people in motion.

The task of revolutionaries is to advance the struggle and bring the largely unconscious strivings of these protests—for power, for a whole new system—into clear view.

The struggle can transform consciousness

It is now well understood in many fields of life that the greatest transformations in people’s minds happen through transformations in their own experiences. It has been proven throughout history that working and oppressed people become open to the ideas and science of class struggle (Marxism) in the context of their participation in the class struggle. In attempting to transform society, they are also transformed themselves—and often quite rapidly.

Participating in the fight allows an individual to more profoundly absorb the ideas and lessons of struggle than they would through decades of reading leaflets as passive observers.

It is no wonder then, why the PSL makes as its top priority to initiate struggles and widen participation in them. This is how revolutionary class consciousness can be built. It also explains why revolutionaries join in any social or democratic struggle, no matter how big or small, and regardless of where people’s consciousness is when they enter. 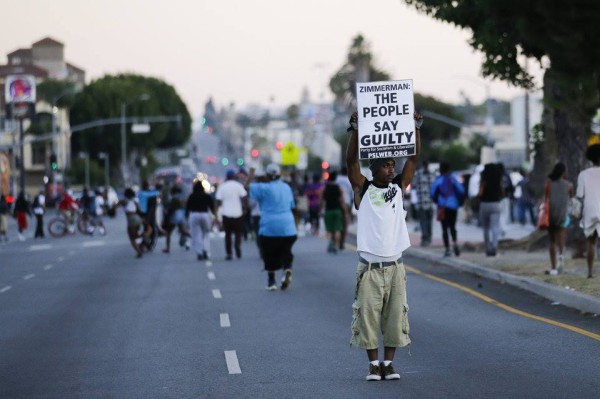 A protest for Trayvon Martin takes the streets in Los Angeles

How has mass consciousness been transformed by the recent waves of anti-racist struggle? There is nothing new about fighting racism in and of itself. Black people need no education in the reality and permanence of racist oppression in this country—nor do Latino, Asian, Arab or Native peoples. The new and dominant political fact is that this round of anti-racist struggle has taken place in an era with a Black Attorney General (the country’s top law enforcement official), and a Black president.

This fact has not resulted in a mass and outright rejection of President Obama. But nor has it resulted in total passivity. The dominant position within the Black community—part disappointment with Obama, part defense of him (usually depending on who one is speaking to)—is often expressed in terms like “it’s not his fault, he’s just one man, he can’t change the system.”

Revolutionaries have to think carefully about such sentiments, which express simultaneously a defense of the executive of the capitalist state (Obama) and a potentially revolutionary notion: that he cannot change the system.

Regardless of the characterization of Obama as an individual policymaker, the broader point remains: the presidency of Obama has squashed the idea that one man can rectify the national oppression of Black people or that elections can change the system. Indeed, it has confirmed to millions that there is a “system” behind the president that represents the “real power.”

In history, we have seen that up until the last possible moment, huge numbers of people often believe that their trusted leader is simply surrounded by bad advisors. In the American Revolution, many colonists blamed Parliament for deluding King George. They continued petitioning the monarch, fully expecting him to take their side against his own government; his rejection was a significant factor in stimulating rebellion.

The same was true in the Russian Revolution. The czar’s ministers were widely hated but the czar himself enjoyed broad support until shortly before he was overthrown; that is, until the sharpening contradictions in society brought into the open where he really stood. Once the popular illusion with the czar snapped, it unleashed a torrent of revolutionary feelings and consciousness.

The dominant feature of this new anti-racist movement has been its episodic and sporadic character. The protests last only a few days, or weeks, before dwindling. In such short time spans, few participants are consolidated into existing organizations, and only in a few instances have youth formed their own collectives.

Finding out about the protests through social media, sometimes student groups, and sometimes the mass media, no organizational center or hub has developed for the new anti-racist movement. No organization has arisen yet to coordinate national action, to debate and synthesize the lessons of each wave of struggle and to develop a comprehensive program that those joining the struggle can gravitate to as their own. At various stages, the National Negro Congress, SNCC and SCLC, and the Black Panther Party each played such a role.

The most well known anti-racist political figures, Jesse Jackson and Al Sharpton, operate with a personalistic model, not a movement-building one. This is sufficient to organize well-publicized protests, which are typically less militant, tightly controlled by liberal officials and can be shut down if need be. It is insufficient for a sustained movement deploying a variety of tactics, raising political consciousness and training a new generation of leaders.

Civil rights organizations that are tied deeply to the Democratic Party and the political elite can sharply point out racist injustice, but they pull back from linking these injustices to the social system. In this sense, their political leadership facilitates the sporadic and episodic character of the movement.

If there were a leadership explaining simply and powerfully that the system as a whole is racist, that we need to transform all of society—which Dr. King and Malcolm X, for instance, each argued in different ways—this would compel more sustained organizing efforts and revolutionary consciousness.

Naming the problem is far simpler than solving it in practical terms. It may be true that Sharpton organized 100 vigils for Trayvon as a way of getting control of the protest dynamism, which then dwindled, and directing it in the safe channels of petitioning the Justice Department. But it is equally true that there is not yet another national force with the on-the-ground connections and capacity to organize 100 vigils in the Black community on short notice.

The questions of leadership and misleadership in the movement can only be addressed by revolutionaries proving themselves in practice, through participation and self-sacrifice, while developing the personal and political connections with the layer of youth nationwide who are searching for a new direction in the battle against white supremacy.

The stirrings of a potentially mass anti-racist movement, based among Black oppressed youth, is a political fact of singular importance for revolutionaries in the United States. Throughout history, such movements have consistently become the engine for the country’s greatest social upheavals. More upheavals are on the way. The task of revolutionaries is to prepare ourselves and those newly brought into struggle, both organizationally and politically, for the next stage.

Engels on the housing question: Wishful thinking vs. real solutions

by Derek Ford and Curry Malott

Editor's Note: The following article was originally published in March 2020 to accompany the Liberation School study guide for Engels' "The Housing Question." We're republishing it to commemorate the 202nd anniversary of Engels' birthday. Introduction Friedrich Engels...

Engels on the housing question: Wishful thinking vs. real solutions

by Derek Ford and Curry Malott

Editor's Note: The following article was originally published in March 2020 to accompany the Liberation School study guide for Engels' "The Housing Question." We're republishing it to commemorate the 202nd anniversary of Engels' birthday. Introduction Friedrich Engels...