New Book — Women Fight Back: The centuries-long struggle for liberation 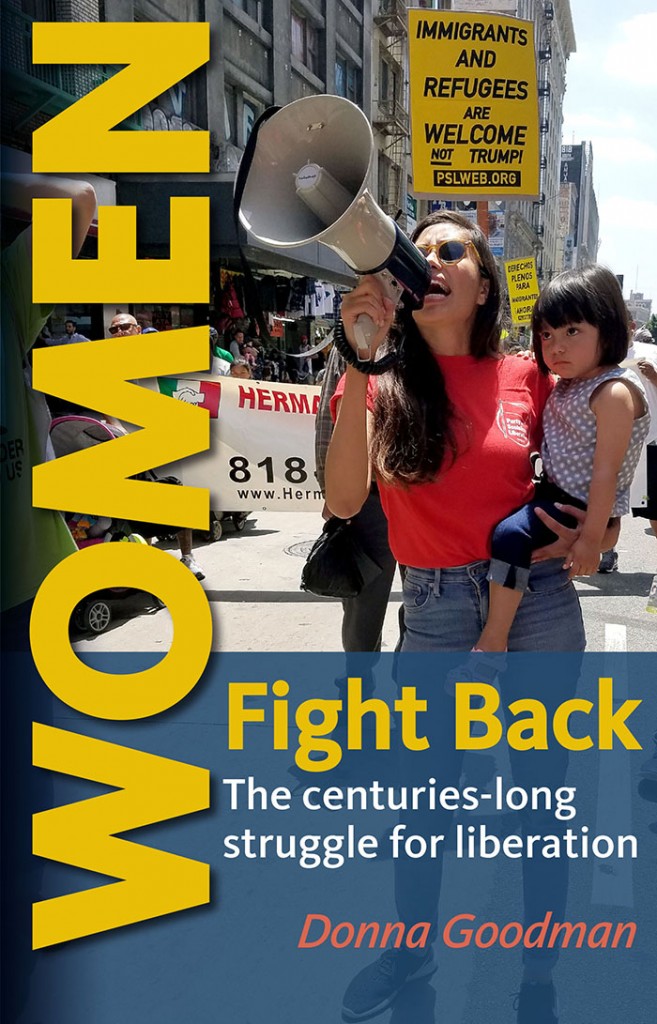 The place of women in society has been put into sharp focus by the election of Donald Trump. As a candidate, he called for criminalizing women who have abortions, he was caught on tape bragging about sexual assault, and he referred to women as “nasty,” “pigs,” and more. Now he’s in office, but he’s facing an ever-growing movement of women of all walks of life who are standing up with determination to say: “we will not go back!”

Liberation Media announces the release of Women Fight Back: The centuries-long struggle for liberation, by Donna Goodman. Women Fight Back traces the historical evolution of a movement that has thoroughly transformed society, and is in need of militant revival today.

Order your copy today at the PSL Publication Store or Amazon!

Donna Goodman, a long-time partisan of the struggle for women’s liberation, recounts how women in the United States confronted a whole society — from the legal system to popular culture to home life — that was immersed in blatant sexism, discrimination and anti-woman violence.

Challenging the notion that the women’s movement just reflected the concerns of the middle class, Goodman highlights the contributions of working-class, Black, Latina, queer and other oppressed women, who always made sure their presence was felt and perspectives were heard. Generation after generation, the movement itself became the terrain on which women of different backgrounds articulated and debated the meaning of liberation, often in radical anti-capitalist terms.

Women Fight Back compares the status of women in the United States with other capitalist societies, and with women under socialism. It concludes with a review of the challenges of women’s organizing today, projecting a vision of how a new wave of militant struggle could be coming in the era of Trump and into the future.

“The idea for this book grew out of a mix of indignation and optimism: indignation toward the right-wing backlash against the gains women have won over more than 150 years of struggle for equality; and optimism that women would once again rise up and fight back to preserve and extend those gains.”

—from Women Fight Back

“Donna Goodman’s book is appearing when we need it most – a time when a new mass women’s movement is emerging. Recovering the militant history of two hundred years of women’s struggles, Goodman reminds us that an attack on inequality, exploitation, and militarism has always been feminism’s revolutionary core.”

About the author: Donna Goodman is a long-time peace and justice activist in New York’s Hudson Valley. She is a member of the Party for Socialism and Liberation and co-editor of the Hudson Valley Activist Newsletter.

The book is available for sale on Amazon and through PSL Publications.

The legacy of Vietnamese women in the national resistance struggle

From abolition to Title IX: Women’s fight for education

Editor's note: The following article was originally published in Breaking the Chains magazine, which you can purchase here. It is not the intelligent woman versus the ignorant woman; nor the white woman versus the [B]lack, the [B]rown, and the [R]ed — it is not even...

Clarifying and inspiring revolution for 130 years: Marx’s “Critique of the Gotha Programme”

by Mazda Majidi and Derek Ford

Karl Marx never intended to spell out what the communist future would look like or how we would get there. His writing that comes closest to doing this is a short letter he wrote in 1875, given the title Critique of the Gotha Programme. Published 130 years ago—in...